Playing with my Dad

We may not have kicked a football around much in the park, as the cliched father-son bonding experience goes, but our recent Brandenburg concerto exceeded such things in abundance. My father, Howard Nelson and harpsichordist Sam Hanson played beautifully in the fifth of Bach’s concerti with the Orchestra of Collegium Vocale. The former principal flute of both the Royal Scottish National Orchestra and the Bournemouth Sinfonietta provided the sounds to which I aspired from when I was young. Although many years ago we both played in The Sinfonietta, this was our first concerto together and for me it was a unique experience. Putting nepotism aside, he’s a wonderful musician whose modesty would retreat not just from the content of this sentence, but the entire eulogy. Nonetheless, for the second reference to cliche, life is too short not to acknowledge special moments with special people, and our recent concert was just this…hopefully everyone enjoyed the gig too. Thanks Dad. 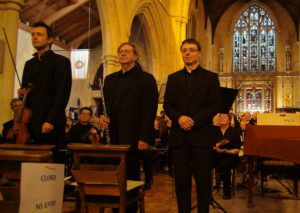