Appearing in the movies

In 2018, I was asked by French-Canadian film director, Francois Girard to participate in his new film The Song of Names. He explained that my role would involve being a body double and violin coach for one of the leading men of the film, Clive Owen. In addition to this, I was to record a few tracks of violin playing in collaboration with the film’s composer Howard Shore, and offer coaching and doubling for two other actors in the film, Jonah Hauer-King and Richard Bremner. Aside from the coaching and playing, my suitability for the role naturally rested on the above actors and me being of similar height and dimensions; the casting agent obviously knew what she was doing!

It was a thrilling experience, both coaching in London and then shooting in Budapest in October 2018. Many friendships were made and our joint transformations into the Jewish prodigy of the film ‘Dovidl’, was as fun as it was visually memorable! This is evident in the image below, showing from left to right, Oliver Nelson, Clive Owen and Francois Girard in the midst of shooting the climactic scene of the film in the Franz Liszt concert hall in Budapest.

The movie is being released in autumn 2019 at film festivals in Toronto, London, St.Sebastian and many more around the world. Personally, I am very excited at the prospect of seeing how the whole inevitably exceeds the sum of the parts, and amongst those parts, one or two of them involves this violinist. 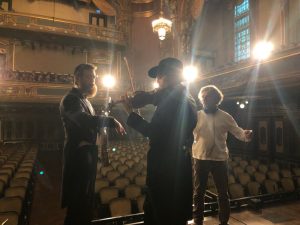